How This River Caused a 50-Year-Long Fight

Why Austria's last free-flowing, glacier-fed river in East Tirol is a success story for conservation and tourism alike...

How much can a person fit into five days? Five days, 120 hours, 7,200 minutes – in our fast-paced world, it doesn’t feel like a huge amount of time. It’s a working week, easily measured in cups of coffee consumed, emails sent and received, and episodes of evening telly watched after a day at one’s desk.

But along the Isel River in Austria’s East Tirol, time takes on a different meaning. It slows down. Here, five days is the time it takes to hike the Isel Trail, where water cooler chat is replaced by the steady roar of waves, spreadsheet columns by towering spruce trees, and the incessant glow of laptop and phone screens by the white of glacial ice, glistening in the sun. 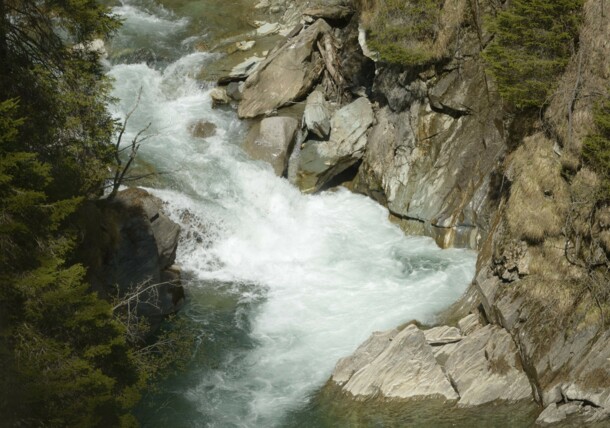 As one hikes through this incredible roster of habitats, the free-flowing Isel Rivers remains the one constant. In all of its forms – as crashing white-cap waves or as a gently babbling stream – it reminds visitors of the way in which it has resisted all interference from the modern world, and it invites them to follow its example. “Take your time”, it whispers, “listen to the birdsong, breathe deep and enjoy the cool, pine scented air – take this moment to enjoy being in harmony with nature”.

This wide, continuously changing riverbed in the valley is now a rare habitat, one which has largely disappeared across Europe. 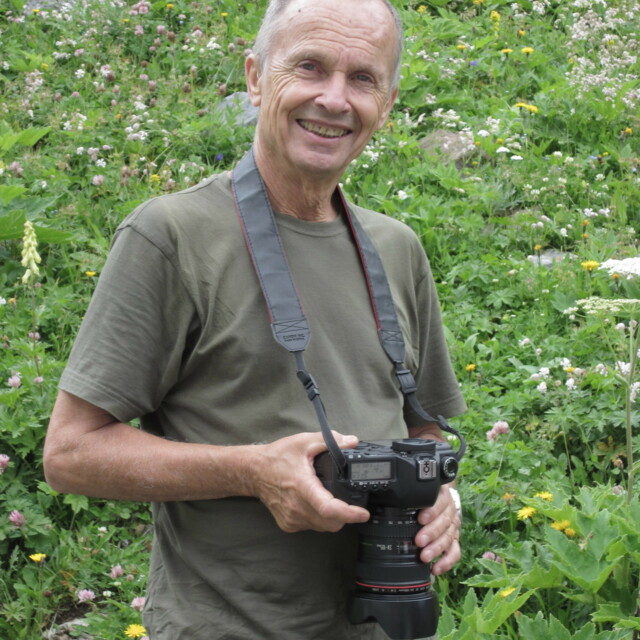 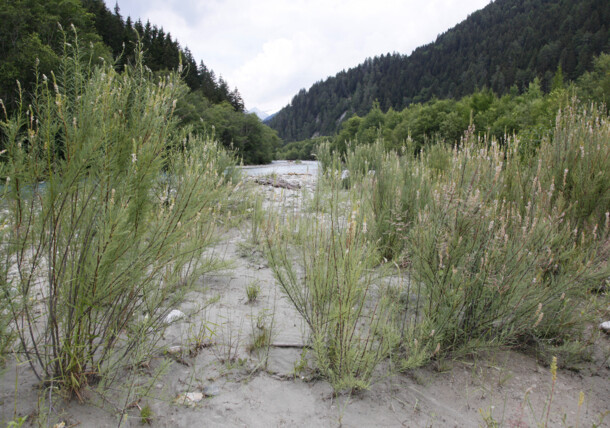 German tamarisks in the Virgental valley

It’s clear that, with free-flowing, glacier-fed rivers increasingly few and far between due to threats such as glacier retreat caused by climate change, it’s more important than ever that those remaining are guaranteed conservation. The Isel River is now protected, and when following the trail, its incredible natural power feels boundless. But its presence wasn’t always so secure.

A Decades-Long Struggle for Conservation

In 1971, plans were made to build a huge hydroelectric power storage plant in East Tirol, which proposed that all glacier streams would be disrupted and diverted so as to fill a reservoir. It’s thanks to the indomitable efforts of individuals like conservationist Wolfgang Retter that the Isel River exists as it does today. In response to the power plant plans, Retter founded the Association for the Protection of the Recreational Landscape in East Tirol, and dedicated himself to campaigning for the river’s conservation, organising lectures with renowned scientists and working hard to convince the local population that this area of outstanding and undisturbed nature must be preserved.

The power plant plans were incomprehensible to me. "That's impossible!" I thought. "We can't divert so many glacial streams here for a reservoir while there are plans for a national park!" So I started asking questions.

The creation of the Isel Trail was the last stone in the protective wall surrounding the river. 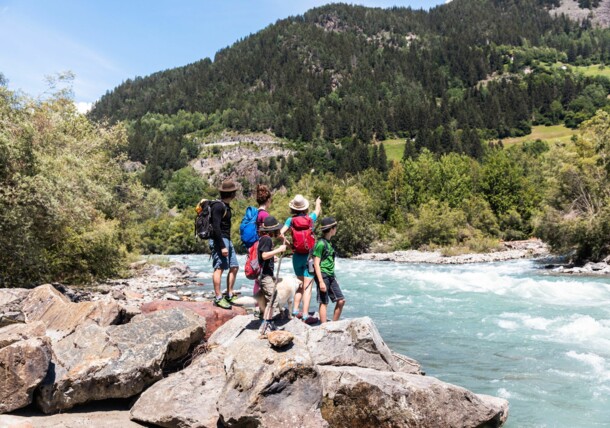 From easier eco-system monitoring for scientific studies, to increased funds for further conservation and the development of eco-friendly policies, the potential of the Isel Trail to benefit the nature that surrounds it is undeniable.

In Austria, conservation and tourism go hand in hand. In few places is this as clear as when following the Isel Trail. Thanks to the unrelenting resolve, expertise and future-facing mindset of campaigners and environmentalists like Wolfgang Retter and Matthias Schickhofer, holidaymakers in Austria can experience the wonder of one of Europe’s last remaining free-flowing glacial rivers. Amongst the quiet hush of the ancient trees, when feeling the mist of a waterfall cool one’s face, and while watching kaleidoscopes of butterflies dance over the riverbanks: this is a place for adventure, where visitors can find their moment to reconnect with the sublimity of the natural world.

This place is completely unique - from an environmental perspective, but also for tourism.
Wolfgang Retter - Environmental Activist

austria.info: Dr. Retter, you have been devoted to conservation of the River Isel for many years now. How did the Isel Trail come about?
Wolfgang: The Isel Trail itself was not so difficult to bring to life - but its groundwork was laid over many years. For decades, the Isel and its tributaries were in danger of being disrupted by a power plant, the plans for which were unveiled in 1973. This power plant would have been the largest reservoir in the Eastern Alps, affecting two thirds of East Tirol.
austria.info: And you campaigned against this?
Wolfgang: Yes. In 1971, Tirol, Salzburg and Carinthia signed an agreement: these three states wanted to establish Austria's first ever national park in the Hohe Tauern, which would highlight and preserve the area's magnificent natural landscapes and well-tended mountain farmland. So when these power plant plans followed just two years later - as a scientist, that was incomprehensible to me. "That's impossible!", I thought, "We can't divert so many glacial streams here for a reservoir while there are plans for a national park!". So I started asking questions. Critical questions, which fazed the E-economy, and for which it was insinuated I'd be held accountable.
austria.info: Held accountable?
Wolfgang: Yes. It was suggested, for example, that I - a teacher - would be sued by this huge electricity company for damages. In response, we founded the Association for the Protection of the Recreational Landscape in East Tyrol to protect the individuals posing these critical questions. The association formed a separate legal entity which offered us, as activists, a level of legal security. In the end, the dispute last until 1989, when the power plants project was cancelled.
austria.info: For what reason?
Wolfgang: As mentioned, the discussion lasted decades - during which time peak electricity prices fell significantly, meaning that the power plant stopped being an appealing prospect economically. The was the main reason - not nature conservation, but profitability. Nevertheless, we celebrated the decision, because it meant that the National Park in Tirol - including East Tirol - could ahead.
austria.info: That was in 1991 - which means it took another 30 years to create the Isel Trail?
Wolfgang: Yes, that's correct - but if we hadn't been successful in our campaigning back then, the Isel Trail would never have been possible. Once plans for the power planet were discarded, things were a bit quieter for the Isel for a while - that is, until 2001, when the European Union and Natura 2000 came into the picture.
austria.info: Natura 2000 is a network of nature reserves in the EU deemed especially worthy of protection. In your opinion, what makes the Isel River such a good fit for inclusion in the Natura 2000 project?
Wolfgang: The Isel River has a number of unique features. Firstly, it's the last Alpine river in Austria which flows freely without interruption or diversion - all other glacier rivers in Austria are used for power generation. Furthermore, the way in which it flows is very special, with the river growing and decreasing in size each day according to time and season. Then there's one factor so special that it draws in experts from all our Europe: the Isel's riverbed is unusually wide, even when it can't be seen. The river is constantly shifting and changing the shape of its bed over long stretches. It digs away at a stone island in one place, builds one up at another, shifting the gravel and sand banks . . . This wide, continuously changing riverbed in the valley is now a rare habitat, one which has largely disappeared across Europe. This makes the Isel River a key location for "pioneer species" - types of plants and animals which, in this case need a constantly changing riverbed to survive. One key example of this is the Myricaria Germanica, or German Tamarisk.
austria.info: The German Tamarisk – an endangered shrub-like plant that grows on the banks of the Isel River.
Wolfgang: Yes - it was ultimately our hook for securing the Isel's Natura 2000 status. The presence of German Tamarisk really strengthened our claim that the Isel itself should be declared a Natura 2000 area. There was strong resistance against this, and it wasn't confirmed until 2018. Inclusion in Natura 2000 was an important prerequisite for the Isel Trail, which opened two years later in 2020. The creation of the Isel Trail was the last stone in the protective wall surrounding the river.
austria.info: So would you say that the Isel Trail is an example of nature conservation and tourism working hand in hand?
Wolfgang: Absolutely. It was key to show the tourism experts that the Isel was something really unique and special for their industry too. This has been wholeheartedly confirmed by hikers following the Isel: they find it thrilling.
austria.info: You've been committed to this work, to campaigning for the Isel, for your entire life.
Wolfgang: Yes, you could say that. I've been involved in this work since 1973. For me, the Isel Trail is the perfect ending in the fight for the unimpaired, continued existence of the Isel River.
media_content.tooltip.skipped